Every time I see flannel I think of that late day in December. Christmas had just passed. I was taking a few days off from work, a much-needed break after a fairly strenuous, albeit exciting, quarter four in my business which also included the publication of my first book.

Bein’ a mama had also meant a bustling holiday season of making it magical, and so it had been weeks of Christmas movies, baking, talking about Santa, listening to Christmas music, decorating, and counting down the days with our electronic advent calendar that Lonnie got us every year. Truthfully, Lonnie had started getting me one of these back when I was in college. I’ve been receiving one every year since and it has only become more fun as I’ve become a parent.

I was heading up to Lonnie’s for a promised post-Christmas visit. We hadn’t seen each other at Thanksgivings as originally planned because the state had changed its household rules due to COVID upticks. So two days before our planned meal together, we canceled. We were all disappointed.

Luckily, I was able to see her at least once in between the two holidays, when I helped procure their Christmas Tree at the tree farm she had been getting her tree from for over ten years. But it was a visit that included driving in separate cars until getting to the farm itself when then my tiny car wouldn’t make it through the muck in the rows and I had to jump into their truck. We rode with all the windows down and our masks on.

There wasn’t any activity that COVID hadn’t changed this year and it made pre-determined illness even worse. Lonnie had cancer going into COVID. COVID stripped away even more of what she was able to do, and isolated her at the same time. Lonnie who loved chats over hot coffee with visitors and who wanted to hug you before you said hello when you arrived, had spent the last year of her life staying cooped up at home, barring the door from a majority of visitors when she couldn’t sit outside six feet away from them masked — which in VT is a good portion of the year. 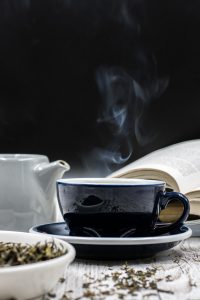 I was an exception to the rule. Allowed entry because of trust, because most often I would change my clothes upon arrival, because of hand-sanitizing before I entered the house and washing my hands once I did,  because I used a separate towel to dry my hands when I used the restroom because I always came and stayed masked and sat six feet away.

I was fortunate that I was still allowed some face-to-face access over this last year, but it wasn’t the same as it had been. We were devoid of the hugs we had always shared as soon as I arrived and when I got ready to go. We were devoid of being able to see each other’s whole faces and reading the array of emotions that this past year brought.  Though I am thankful that in that final week I was with her, she stopped wearing her mask so I could see her whole face and I am certain that even though she could not see mine, she knew just be the corners of my eyes (or the circles) what I was feeling.

So heading up to their house that day just after Christmas, I originally hoped for another game of Upwords. It had been ages since we had played and I would have given anything for a normal chat at the kitchen table, cups of coffee, and a game of Upwords. If she had been up for it. But just days before I was due to arrive she asked if I could help do up the bed in the backroom so she could start sleeping in there and she had asked if we could work on her obituary.

“Whatever you need,” I said.

For the last six months since her stint in the hospital with pneumonia, I had gone with whatever direction she wanted to go. Done whatever she felt up to doing. Unfortunately, knowing she was dying, she was focused on the preparations for her own death and so 99% of our conversations and our activities in the last six months have been all about that. 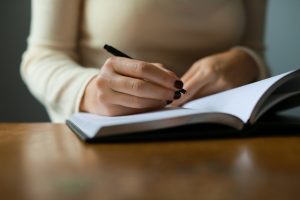 Death has been hanging out with us for months. COVID a year. Cancer for six. None of them have been pleasant companions or welcomed but we’ve dealt with them just the same.

And so I headed up knowing that the visit, however long I was there, would be hard. Always prepared, I had brought drafts of the obituary so we didn’t have to spend our time actually writing them. Selfishly, I had hoped that in drafting them ahead of time, we might have a few moments of non-death-conversation.

I arrived mid-morning and she was in her blue and green flannel bathrobe. The one she always wore. She was using her walker and when I walked in her eyes instantly welled up with tears. The more the days pushed forward, the more emotional she came anytime I spoke to her. It was especially difficult when she saw me because she just wanted to hug me. I knew that.

She ushered me down the hall to the backroom and we began to strip the bed and change it over. She sat and watched as I worked, occasionally directing me how she wanted it even though I had made and remade this bed ad thousand times in the time I’ve known her. I let her direct and followed orders. Occasionally she would give me the latest medical report. The symptoms she was experiencing the most recently were pointing to cancer having spread elsewhere.

I sucked in my cheeks through my mask and breathed heavily in through my nose, trying to will the tears to stay inside. Keep it together. You don’t get to be more upset than her.

I let her guide the conversation and so, of course, it came to arrangements, next steps, things she wanted done after, and her husband.

He’ll be taken care of. Don’t you worry. I’ve got him.

She had stood up to do something and lost track of what it was and then plopped down on the bed. Her shoulders began to shake as she wept silently at first.

With a shaky hand she pointed at a flannel sheet folded and stacked in the corner. I retrieved it and handed it to her.

She put the flannel sheet over her, draping herself like a kid who plays ghost.

I watched and waited, wondering what was happening.

Then she spread her arms out wide, the flannel sheet fanning out like it had grown wings.

I was in a squat position instantly. Arms around her, my face behind my mask pushed into the flannel sheet and nearly suffocating me. My thighs burned, I couldn’t remember the last time I did squats.

“Just sit on my lap,” she said through tears.

I couldn’t. One day I could have, but not today. She couldn’t bear my weight. So I stayed squatted, and choking for air through the mask and the flannel sheet, and holding her tightly, and feeling her body shake as she wept, and hearing the sounds of her sobs in my ear, as silent tears ran down my face and I thought I might snap in two.

This had been our first real hug in over a year and we both knew it would be our last real one.

Masked. Clinging to each other through a flannet sheet. Protecting each other in the face of two unknowns.

Mother’s Day Cards and Bonds Beyond Bounds. Writing Through Grief.

Staying Away from Stray Cats and Choosing a Better Partner